As the director of hospitality systems since her promotion in 2017, Katie has been responsible for the oversight and direction of the domestic strategy and execution of all applications and peripheral systems for hotel operations and guest experience. The growing Sonesta portfolio currently includes 13 full service hotels, and 42 extended stay hotels throughout the U.S.; as well as 25 hotels internationally.

Katie joined Sonesta in 2013 as manager of opera support and integration. Since that time she has continued to grow as Sonesta increases its footprint in the US – acting as liaison between corporate IT initiatives and property integration. Since May 2015 she has also directly managed the field IT operations team, overseeing their property specific priorities and goals.

Prior to joining Sonesta, she held several management roles with Micros Systems (now Oracle Hospitality) where she oversaw two teams in deployment and support of global OPERA PMS implementations for major hotel chains. 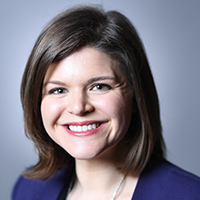