Full Name
Gregory Forbes
Job Title
Director of Above Wing Operations
Company
Delta Air Lines
Speaker Bio
Greg Forbes is the director of above wing operations for Delta Air Lines, responsible for airport policy, procedure, technology and field support. Above Wing refers to all areas of airport operations that touch the customer, from lobby to security checkpoints to Delta Sky Club lounges and gates. Delta’s agents are at the strategic core of Delta’s operations, and the Above Wing team creates tools for agents to consistently deliver the “Delta Difference.”

Delta recently opened the first fully biometric airport terminal in the US at Atlanta’s Hartsfield-Jackson International Airport, which allows customers travelling internationally to go “curb-to-gate” without needing a boarding pass or passport. Greg is the program owner for airport biometrics at Delta, and will share the experience of designing and deploying the solution at the world’s busiest airport.

Delta has been recognized as a Fortune's top 50 Most Admired Companies in addition to being named the most admired airline for the eighth time in nine years. Additionally, Delta has ranked No.1 in the Business Travel News Annual Airline survey for an unprecedented eight consecutive years and named one of Fast Company's Most Innovative Companies Worldwide for two consecutive years.
Speaking At
Keynote: How Delta Air Lines Elevates Experience and Meets High-Flying Expectations 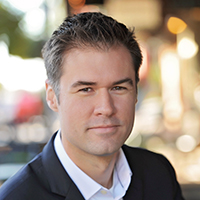